The winner of the competition for the City of Culture is an architect of international renown. A distinguished member of the group of The New York Five, he opened his own studio in New York in 1980, after teaching at some of the most prestigious universities of the World, such as Harvard, Cambridge, Princeton, Yale and Ohio.

In 1967, Eisenman founded in New York the Institute for Architecture and Urban Studies (IAUS), a body of international experts dedicated to architecture, which he was director of until 1982. He was awarded the first prize at the third edition of the Venice Architecture Biennale in 1985 for his project "Romeo & Juliet". He was also one of the two architects chosen to represent the United States at the Fifth International Architecture Exhibition in Venice in 1991, and he returned there again in 2002 and 2004 to display the project for the City of Culture of Galicia.

He has authored emblematic architectural works such as the Wexner Center for the Arts in Ohio, the Aronoff Center at the University of Cincinnati or the Holocaust Memorial located near the Brandenburg Gate in Berlin. His projects are characterized by a style defined as "modern deconstructivism", very close to the line of work of Arata Isozaki, Frank Gehry or Rem Koolhaas.

Peter Eisenman has also been awarded many other prizes and distinctions, including the Guggenheim Fellowship, the Brunner Award and the National Honor Award of the American Institute of Architects, the latter on two occasions, one for the Wexner Center in Ohio and the other for the headquarters of the Koizumi Sangyo Corporation in Tokyo.

By laying out the buildings as an artificial topography on the top of the hill, and excavating it in such a way that it looks as if the hill were carved out, the architect buries the building without really doing so, and builds on the top without seemingly occupying it.

The result is an undulating landscape, generated by Eisenman superimposing the ground plan of the medieval city of Santiago on to the striated ripples of the pilgrims' scallop shell, composing an expressionist yet pleasant scenery that blends gently into the terrain, extending the deep clefts of the streets into placid promenades towards the parking space by the highway and towards the distant skyline of the Cathedral". 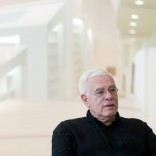 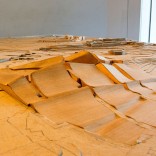 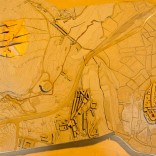 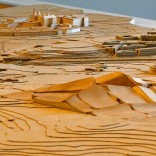 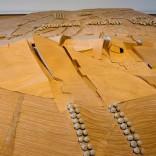 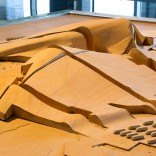