Galicia’s Forest stands on the slopes of Gaiás Mount with seven thousand native trees (oak, chestnut, willows, birches, alders, hawthorns, rowans, laurel...). This results in 34 hectares of a new green lung that increases the biodiversity of the area and improves the environmental metabolism of Santiago. At the same time, it contributes to the integration of the Cidade da Cultura in Compostela, encouraging visitors to come by walking.

A 5 kilometres network of pedestrian walkaways favours its use as a place for walking, for being in touch with nature and for outdoor sports enthusiasts. The walkaways network also allows climbing the Mount Gaiás , through softer or harder routes, offering alternatives for all visitors. When there is no natural light, a LED lighting system of low consumption will allow the use of these paths. Likewise, a PV station is settled on the top of the mountain, which contributes to the retrieval of this energy. In addition, this system offers a soft and functional lighting that prevents light pollution.

The Galicia’s Forest has rest areas and a beautiful viewpoint at the top where the visitors can discover one of the great unknown views of Santiago. There is a bench towards the west that offers a privileged panoramic to contemplate Compostela sunsets.

The tree planting involved dozens of citizens and schoolchildren, a symbolic gesture that seeks to demonstrate that Galicia’s Forest belongs to all the Galician people. This project, drawn from the original idea of Eisenman Architects, is the result of the collaboration among four departments of the Galician Government: Cultura, Educación e Ordenación Universitaria ; Medio Rural ; Economía, Emprego e Industria  and Medio Ambiente e Ordenación do Territorio .

The Escola Galega da Paisaxe technicians (Juana de Vega Foundation) and the principal Isabel Aguirre gave advise about the project. Isabel Aguirre is a recognized landscape architect whose outstanding works, such as the park of San Domingos de Bonaval , represent a great contribution to Galicia.

The species selection and planting tasks were carried out by SEAGA (agricultural services public company), with the participation of AMICOS members, (Families of People with Intellectual Disability Association). The initial layout of the paths corresponds to Perea+Euroestudios; the furniture and several architectural solutions, the lighting design, as well as the final layout and solution of the paths were made by RVR architects. 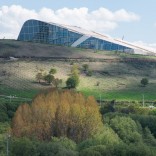 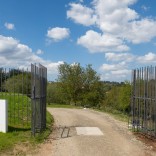 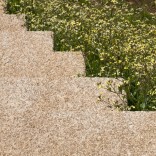 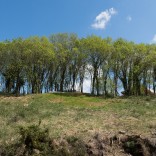 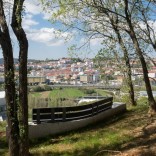 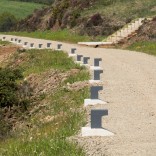 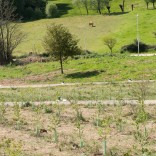